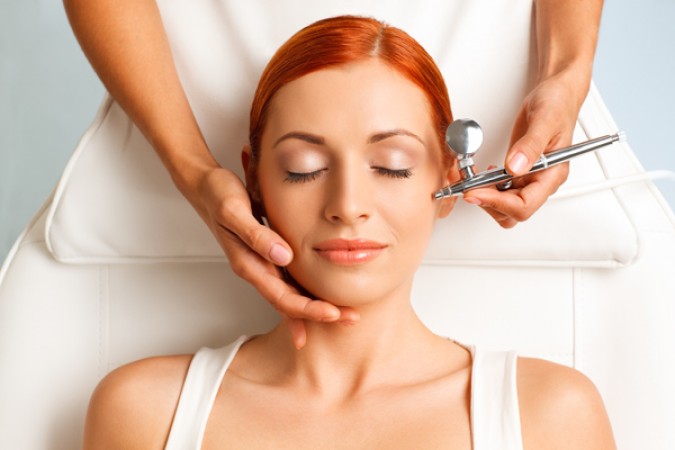 Oxygen mesotherapy is a modern mesotherapy (introduction of medicinal preparations under the skin of the patient) without injections through the pressure of oxygen, which allows the procedure to be carried out also in those patients who have any given contraindications to injections, or fear of drug introduction using a needle.

In normal condition, cells of the human skin surface receive oxygen from the air, where its capacity is about 18%. If this figure is artificially increased to 98%, then the rate of oxygen exchange in skin cells significantly increases, which allows the therapeutic substances to quickly reach the desired depth. An additional bonus is that the oxygen entering skin in the process of oxygen mesotherapy alone activates many physiological processes, because the lack of oxygen is very noticeable on the facial skin, which leads to timely aging, a decrease in skin tone, loss of freshness.

The procedure of oxygen mesotherapy:

The skin is thoroughly cleaned and degreased;
With the help of a special device pure oxygen with a mesopreparation is supplied into the skin under pressure of 2 atmospheres;
The stream of oxygen carries active substances of the preparation through the intercellular space into the deep layers of skin, without damaging or injuring it.
Getting under the skin, active substances along with the oxygen itself carry out their healing effect.
The composition of whey may include a variety of drugs, depending on the problems the procedure is aimed at.

A strong oxygen jet does not violate the integrity of skin, there is no contact with the normal needle, hence after the procedure absolutely no traces can be visible on the body surface. Thus, oxygen mesotherapy is painless and safe. The great advantage of the procedure is the lack of restrictions on the age and type of skin. Its performance is not affected by the season either.

Indications for usage the method of mesotherapy are as follows:

– Presence of mimic and deep wrinkles;
– Deep lines in the nasolabial fold;
– Dark circles around the eyes and the presence of hernia;
– Presence of the double chin;
– Emergence of pigment spots;
– Dark color and uneven relief of the face;
– Pitted acne scars;
– The procedure has the effect of detoxification and skin whitening.
Contraindications:
– Pregnancy
– Epilepsy
– Cold, flu
– Skin rash
– Sensitive skin
– Skin rash
– Surgical scar of less than 12 months

Duration of the procedure: 30 minutes

Course: 6-10 sessions at intervals of 1-2 weeks, this procedure is also perfectly combined with other methods for lifting and rejuvenation.